8-bit Atari computers (referred to as “Atari” from now on) were created to bring entertainment and simplify work in the households in the eighties and early nineties. The Atari catchphrase “Power without the price” was surprisingly well related to reality. Computers were quite cheap as for that times (not for the people living in constrained market conditions in Poland, though) and well-designed to actually provide the promised power.

Architecture
There were several Atari 8-bit models available on the marked across the years, although the internal architecture did not significantly vary. Among the most important changes are:

Atari was (and still is) powered with MOS 6502C CPU clocked at 1,733 MHz (PAL, 50 fps) or 1,79 MHz (NTSC, 60 fps). Most computers of that era had to be aligned with TV-signal frequency for the sake of simplicity. It means that most of the software runs faster on the NTSC based machines (music plays quicker, games are more difficult, etc.). 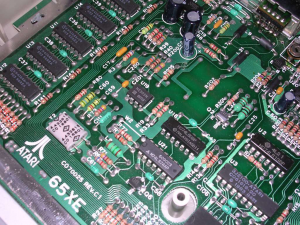 The main CPU is supported by several auxiliary chips. At least three of them together with their functionalities are worth mentioning:

Since the creators of Atari wanted it to be much more than just another toy to play games, they decided to equip the computer with fully fledged and extensible software. Each Atari computer came with an integrated BASIC interpreter that made it easy for everyone to write its own programs, for instance, for home budget management. You could start programming after one second from flipping the power switch.

Also, the bundled Atari Operating System had a lot of innovative features, including but not limited to:

Community
Atari community is still very active these days. Poland belongs to the top countries in terms of the number of community members, gatherings and software created. There are several gatherings in Poland that are organized in regular, most often annual, basis. Among the major ones are:

The most important part of each gathering is so-called “competitions”. They consist of few different categories (music, graphics, game, etc.) so that every participant could prepare something he would like to present to the whole community. All works are then presented (usually during Saturday night) and everyone votes for his favourite creation. Winning such competition guarantees lifetime glory and provides recognition among the community members from around the world. 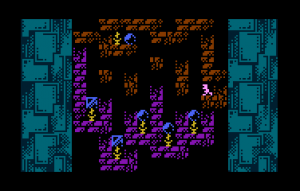 And when I say that community is active, I mean active. To give you some numbers: just for the 8-bit Atari alone, there were 81 new games created in 2015 and 87 games in 2016. That gives nearly 2 new games per week.

Besides the big gatherings, there are also smaller, local ones organized ad-hoc without much planning. They are more or less regular in every region of Poland with strong Atari community (Trójmiasto, Warszawa, Kraków, Wrocław, Górny Śląsk).

It’s not only software that is actively created, also the hardware guys are very prolific and are constantly creating devices that make it easier to use Atari with modern hardware and technologies like hard disks, ethernet, LCD TVs, etc. The devices and extensions that I consider most valuable for every Atari users are:

Programming Atari
There are not many people who actively use Atari for doing the actual software development. Machines of that kind are so severely limited that creating comfortable tools (editors, debuggers, etc.) is nearly impossible. Naturally, such tools exist, but they tend to use all available resources, leaving barely any place for the program is actually developed. Sure, we have hard-drives, memory expansions, RAM-disks, 80-column text mode, but it’s very easily beaten by a modern PC with contemporary tools. So if you’re not the nostalgia-driven nerd but want to do some real job, configure cross-compiler for Atari on your PC.

Debugging with Altirra emulator
Such cross-compiler will crunch the 6502 assembly code and create a binary file that could easily be loaded on Atari. Actually, you don’t even need Atari, because there are several emulators in the wild, some of them still developed and maintained until this very day. Most emulators provide powerful tools that greatly improve the speed of development and debugging. Step-by-step program execution, processor execution history, CRT laser beam location preview, breakpoints, integration with modern IDE, real-time memory manipulation just to name a few. In addition, such an emulator (when asked to) could be orders of magnitude faster than real Atari in terms of CPU processing or I/O operations.

Besides emulators, one has the following tools at his disposal: 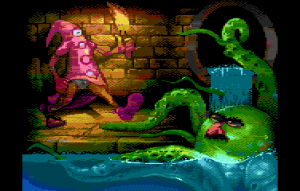 It is worth mentioning that also in the past when Atari was on the spot, big software houses like Lucasarts or our domestic L. K. Avalon used bigger machines like Amiga to develop their games for 8-bit Atari.

Curiosities
Despite having relatively simple architecture and being a nearly 40-year-old computer, Atari still doesn’t cease to amaze people who actively use it. Most motivated guys still reach behind the well established limits and keep discovering features that would render the creators of Atari speechless. Some of the tricks are possible only due to bugs in the hardware design and are very volatile, i.e. could be easily reproduced only on a particular piece of Atari or only when using Atari with chips produced at particular point in time.

Here are some of the most interesting examples:

​Smart healthcare is one of the toughest but also fastest growing industries. A Silicon Valley start-up with a strong background in medical surgery and Thaumatec…
read more

The City of Amsterdam has been very actively engaged in smart city development. Upgrading the street lighting infrastructure with new technology was high on the…
read more

Thaumatec built the solar-powered Lora Gateway because we believe, that this device can solve a lot of global problems and help many businesses.
read more

​AI is the most exciting field ever, especially since the creation of robots. Thaumatec was lucky (and qualified) to be assigned to work on a…
read more

The consequences of sleeping deprivation can affect many, so a solution was formed for this problem and Thaumatec helped in the making. Read our story…
read more

Hago Next, a cleaning company that provides services to public places like train stops, was searching for the ideal partner to provide them with IoT…
read more

Do you need a help with choosing a service?

This website uses cookies to improve your experience while you navigate through the website. Out of these, the cookies that are categorized as necessary are stored on your browser as they are essential for the working of basic functionalities of the website. We also use third-party cookies that help us analyze and understand how you use this website. These cookies will be stored in your browser only with your consent. You also have the option to opt-out of these cookies. But opting out of some of these cookies may affect your browsing experience.
Necessary Always Enabled
Necessary cookies are absolutely essential for the website to function properly. These cookies ensure basic functionalities and security features of the website, anonymously.
Functional
Functional cookies help to perform certain functionalities like sharing the content of the website on social media platforms, collect feedbacks, and other third-party features.
Performance
Performance cookies are used to understand and analyze the key performance indexes of the website which helps in delivering a better user experience for the visitors.
Analytics
Analytical cookies are used to understand how visitors interact with the website. These cookies help provide information on metrics the number of visitors, bounce rate, traffic source, etc.
Advertisement
Advertisement cookies are used to provide visitors with relevant ads and marketing campaigns. These cookies track visitors across websites and collect information to provide customized ads.
Others
Other uncategorized cookies are those that are being analyzed and have not been classified into a category as yet.
SAVE & ACCEPT